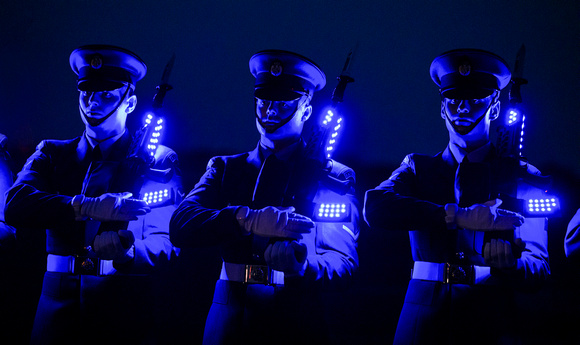 Members of The Queen's Colour Squadron display, part of a stunning lightshow to mark the centenary of the Royal Air Force Benevolent Fund. The event, which took place at RAF Odiham, launched the charity’s major new campaign to double the number of people they support. The event saw 1,000+ RAF Family members come together to form the radar to highlight the Fund’s drive to get the public to Join the Search. Change a Life.

The Royal Air Force Benevolent Fund is the leading welfare charity supporting current and former members of the RAF, their partners and families, providing practical, emotional and financial support, whenever they need us.


●Spectacular ‘Human Radar’ lightshow created by 1,000 serving and former serving RAF personnel, Air Cadets and their families
●Lightshow celebrates the launch of the RAF Benevolent Fund’s Join the Search. Change a Life campaign to highlight the charity’s search for those who served and may now need support

25/06/19, RAF Odiham, Hampshire Last night a crowd of 1,000 members of the RAF Family joined together to create a giant ‘Human Radar’ in a spectacular lightshow.

The event took place at the start of Armed Forces Week to celebrate the launch of the RAF Benevolent Fund’s Join the Search. Change a Life campaign encouraging the public to get thousands of RAF veterans and their families ‘back on the radar’ and, if they need it, accessing support that is rightfully theirs.

The lightshow was created using Xylobands LED wristbands which lit up the crowd turning it into a pulsing, sweeping radar, before changing colour and transforming into the familiar RAF roundel, and finally the RAF Benevolent Fund logo. Beneficiaries whom the Fund has helped were in the heart of the circle including former Sergeant Bob Greig, 59, who joined the RAF in 1979 and served for six years as a parachute jumpin
Oliver Dixon - www.olliedixon.com
User Agreement
Cancel
Continue