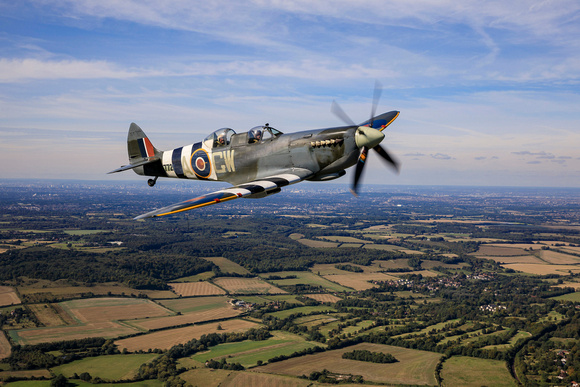 Ninety-seven-year-old RAF veteran George Dunn flies in a Spitfire for the first time in 72 years to mark Battle of Britain Day. The former Bomber Command pilot has backed the RAF Benevolent Fund’s centenary campaign to get RAF veterans in need back on their radar and seeking the help they are entitled to. George took to the skies from Biggin Hill Heritage Hangar today, Battle of Britain Day, the 79thanniversary of the battle.


The Royal Air Force Benevolent Fund is the RAF’s leading welfare charity. We exist to support current and former members of the RAF, their partners and dependants, whenever they need us. In 2018 we spent £21M supporting more than 53,000 members of the RAF Family. For more information visit: www.rafbf.orgTwitter: https://twitter.com/RAFBF

The RAF Benevolent Fund offers a wide range of support for serving and former serving personnel and their families, from financial grants for one-off and day-to-day costs, respite breaks and emotional support. Last year it spent £21M on welfare support for the RAF Family across 29 countries, including:

George Dunn: Flt Lt George Dunn DFC is now 97 years old. During the Second World War, he flew a total of 44 operations with Nos 76, 608 and 104 Squadrons, 30 in Halifax bombers over targets in industrial Germany and 14 in Mosquitos bombing Berlin. He took part in the Peenemunde Raid in August 1942 when a late change of plan switched his squadron from the fourth to the first wave. The fourth wave lost 46 aircraft! After the war George continued to fly for the RAF until 1947, testing a number of aircraft types including Mosquitos, Spitfires, Hurricanes and Mustangs for a maintenance unit in Ismailia, Egypt. In 1948 he returned to his pre-war employment with
Oliver Dixon
User Agreement
Cancel
Continue