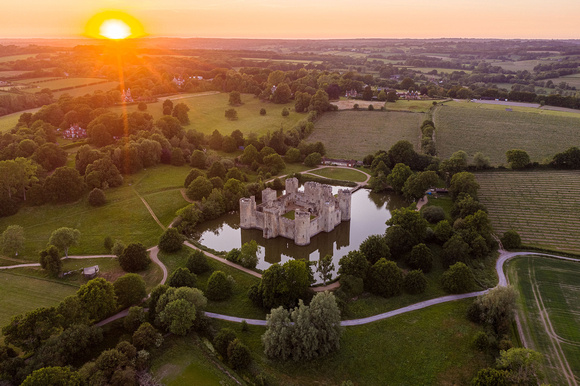 Bodiam Castle, East Sussex photographed by drone in the glorious sunshine as a number of National Trust properties reopen on Wednesday 3rd June 2020. Whilst the castle remains closed, the footpaths around the castle grounds and moat can be accessed by the public.

Bodiam Castle is a 14th-century moated castle near Robertsbridge in East Sussex. It was built in 1385 by Sir Edward Dalyngrigge, a former knight of Edward III, with the permission of Richard II, ostensibly to defend the area against French invasion during the Hundred Years' War.

From Wednesday, June 3, the Trust will begin a phased and gradual reopening of a small number of its gardens and parklands in England and Northern Ireland. Over the coming weeks more places will begin reopening. Tickets must be booked in advance online.
Oliver Dixon
User Agreement
Cancel
Continue